After midnight and still going strong

Sorry this blog is a bit late in getting posted but it has been rather busy at the Race Control HQ since the last post. Photos and videos have been coming in, as well as it being a stopover venue for the racers as they re-fuelled briefly with hot food at 19.30 and got going again, leaving the crew to re-group and evaluate how things have gone so far, and settle the action plan for the overnight rotas until 6.30am.

Overall everyone is really pleased with how things have gone today, with the team working well together and being flexible with the roles involved. The racers have been amazing and haven’t walked with the bike once, even on the gradients of the Hardknott Pass and Wrynose Pass (see photos and check out the gradients). 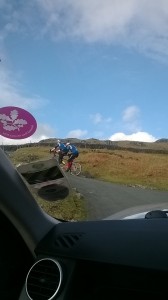 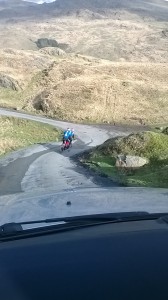 As mentioned in a previous blog, when Norman and James got to the top of a steep hill, the crew would be there with cowbells, cheering them on. On one of these ascents, they spotted a random couple of bikers cycling up the hill from the other direction – so Norman and James took the cowbells and shook them as the cyclists reached the summit – with the crew cheering them on as well. A bit reminiscent of the amusing video clip link below – a spoof of the Tour de France.

Big thanks to Tracey and Trevor (Tracey is one of Christine’s work colleagues) who happened to spot the Beech Boys Tandem near Coniston and pulled in to get some video of them passing (see attached). You can hear Tracey cheering them on – Norman and James were really encouraged by that, so many thanks for sending the video through.

There was also the occasion today when a passerby saw the Beech Boys and commented to the follow car: “Some people are born with madness, others achieve madness!”

As this blog is being written Norman and James are still out there on the bike (yes, they have both achieved madness).  James’ legs are suffering a bit and need regular massaging. Norman’s bottom is suffering from too many hours on the saddle, even with padded shorts. They still have another 6 hours to go, neither having slept at all today since they left at 5.30 Saturday morning.

The plan is to re-group at Jonathan and Annie’s house in Ulverston about 6.30am, everyone get some sleep before brunch about 12 noon. A team debrief will follow with final photos and stories for the next blog which should be posted Sunday afternoon/early evening. Then back to work for everyone on Monday morning! What did you do over the weekend….? You wouldn’t believe it if I told you…….!