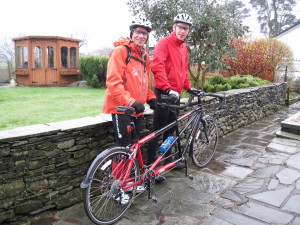 Bike gets its first outing

James and Norman headed off in the rain for their first ride on the tandem they will be using in Race Around Ireland. Their plan was to ride 6 local circuits around Coniston Water in order to get used to the gearing of the bike and make adjustments to the bike setup.

They enjoyed passing a number of local people they knew, including Hadwin’s Landrover garage in Torver – one of their sponsors for the ride.

The boys were pleased with their training to date and things are building well for 12th April, when they will be out for a 24 hour ride with their support crew. The plan is to cycle the Fred Whitton route and then continue through the night  on more local roads in South Lakeland. This will be an important training event as they will be trying out equipment that will be important for the race such as lights for night time riding, radios for bike/support car communication and food and drinks needed to fuel the muscles spinning the pedals!

There is plenty still to be done, but this has been a positive step forward in preparations.