Thank you for all the messages of encouragement being sent through Facebook and to beechboystandem@gmail.com – they are being forwarded to the crew to encourage the boys at each stop.

Thank you too to the supporters who have met up with us so far along the route. Thanks to Paul Moore, a friend of Jonathan’s, who followed the tandem and met up with the riders and crew at the Time Station in Moira. 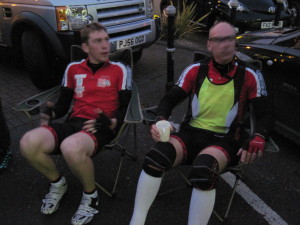 Thanks to Christine’s mum Minnie, sister Pauline and niece Amy who welcomed the support van near Coleraine at 11.30pm, where the vacuum packed frozen meal supplies were transferred from freezer to van. A welcome cup of tea and wee buns were passed around, and beds available for all to crash out until the wee hours, before they all went out to meet Norman, James and the follow car at Time Station 4 nearby at 4.00am.

Many thanks to Christine Lynas, a friend of Christine’s, who joined them to cheer the tandem on along the Windy Hill Road at 4.30am! In the dark it was difficult to tell who the riders were from a distance, so we cheered on three others before Norman and James came along…!!

Apparently at one stage during the night, a bat was flying alongside the tandem, and they had to dodge it several times.

In the early hours, Norman and James tucked into some homemade chicken soup which had been heated and put in a thermos flask at Minnie’s – a welcome change to the cereal bars they have been consuming regularly each hour.

Bertie Brown managed to check out some of the landmarks today – as you can see him in the photo in the Free wee library at the entrance to the park at Lough Swilly, Buncranna. 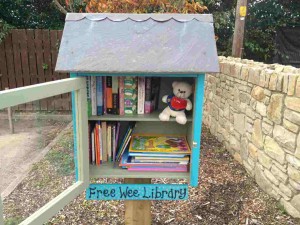 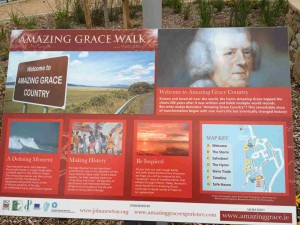 This is where John Newton, the writer of Amazing Grace, was miraculously rescued in a storm at sea and later had a massive impact on the abolition of slavery. Two of the charities we are supporting (Tearfund and Snowdrop Project) are working against the current slavery caused by human trafficking. 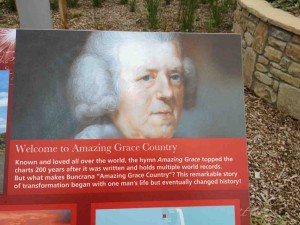 Norman commented that John Newton may have been a good hymn writer but he was no cyclist, since his ‘chains fell off!’ Obviously Norman has too much time on his hands at the moment!

The boys are doing well despite sore knees and bottoms. Overall team spirit is good.

Check out the tracking on the race to see their progress – as I write this I have just had a text from Jonathan: ‘The bike has done 300 miles according to the trip computer. Mamore gap all done and ridden all the way’. They made top speed of 51 mph on the descent from Mamore Gap. Then at the top of the same pass an elderly gentleman who had been watching them all the way up, started to jig and dance and congratulate them. It was hilarious and encouraging all at once – his enthusiasm was infectious!