Messages received at Race Control HQ continue to be encouraging. The tandem is coping well and has only needed a cable tightened on the disk brake so far.

Norman and James are coping well and have only needed regular stretches and nourishment breaks. Jonathan is very impressed with their fitness levels and ability to get up those hills. He also commented that James is having favouritism shown to him by the physiotherapist, but will overlook that for now since they have only been married 7.5 months!

The cow bells may have seemed a good idea at the time when Jonathan packed them last night, and although they might be encouraging for Norman and James to hear each time they conquer a steep hill, the team members are getting a bit aggravated by the sound as they jingle in the car at every turn. They may not survive these 24 hours and may be found on a roadside somewhere in the South Lakes area!

By the time you read this blog, they should have conquered the Hardknott Pass (max 33% average 15% gradient – brutal climb with lots of hairpins for those of you who don’t know it) and then the Wrynose Pass (max 25% average 5.7% – last big climb today) – all good experience for Ireland. We will let you know how they got on in the next blog later today.

Laura and Lydia are becoming dab hands at driving the Discovery now (affectionately known as Landrover Disco) which will be a big help in Ireland. In fact Adam’s Driving School was so successful, that he was last seen asleep in the back being chauffeur driven!

You will see from the photos that pit stops have been allowed – Norman and James decided to refuel at the petrol pump in an attempt to make them go faster. They were amused by the ‘servicing Norman’ sign, as they were refuelling on jam sandwiches, cherry tomatoes and high octane energy drinks. 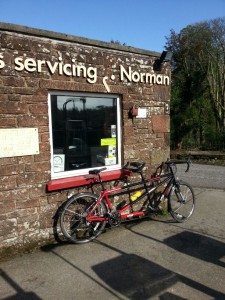 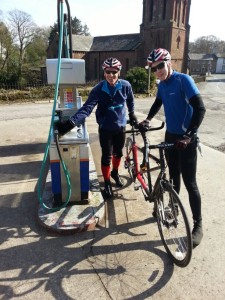 This should make them go faster! 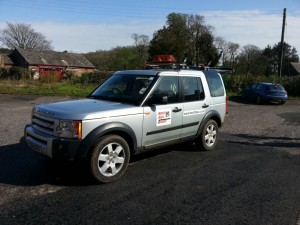 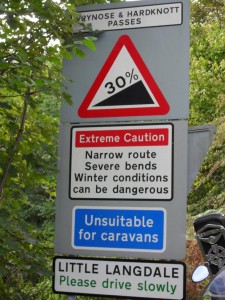 Not for the faint hearted