Race Control for Beech Boys is now set up in Coleraine where Christine is based with her family, so normal service of blogs has been resumed. Thank you to all those who have been following our progress on the race tracker: http://race.blackblox.si/

Since the last blog, the Official Launch of Race Around Ireland took place on Saturday evening, when all the riders were presented with official cycling shirts. You can see Norman and James wearing theirs in this photo with the crew and our mascot bears. 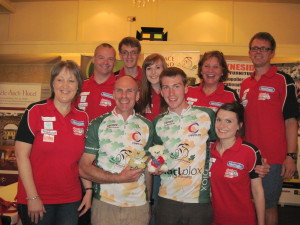 Unfortunately a good night’s sleep was prevented by a rowdy hen party staying at the hotel, so we were all a bit bleary eyed when we met up for breakfast. 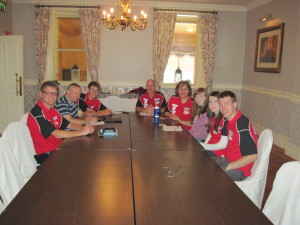 During our final team talk before race start crew chief Jonathan encouraged us to stay positive and find something to laugh about even in the tough situations, and think TFM at all times:

or should that be TFM for Totally Flippin’ Mental

Race started on Sunday afternoon and we were allocated the start time of 15.24. The sun shone and there was a fantastic atmosphere amongst the crowd gathered to watch just beside Trim Castle. 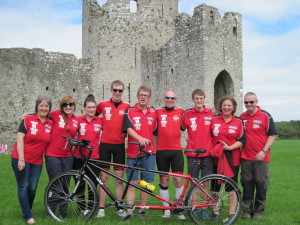 A funny incident occurred when the Irish gentleman taking our team photo shouted ‘Thumbs up’. Lydia and Laura got a fit of the giggles as they thought he had said (in his Irish accent) ‘Tums up!’ 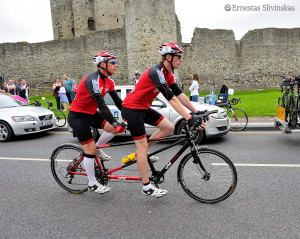 Norman and James limbering up 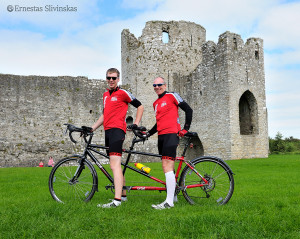 Beech Boys Tandem ready for the off 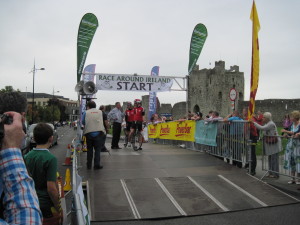 Beech Boys at the start line