Race Around Ireland 2014 has now finished. The best part of 2 years’ preparations has seen Beech Boy Tandem through an epic week. After drawing to close our involvement in the race at Limerick, the BBT team has had time for some sleep and recuperation before driving on to the race route south of Navan to cheer on Valerio Zamboni and Chris Hopkinson at the top of the final long climb of the race.

See the link below of Team BBT supporting these racers:

Things we have reflected on as a team have inevitably included the question ‘could we have done anything differently to have kept in the race?’ Crew chief Jonathan commented that there was nothing more he could ask Norman or James to contribute. Norman was developing a very sore knee which may have held up to the race end but was potentially going to limit his power input the further we went. James had been on powerful antibiotics the week before the race, and this contributed to intestinal difficulties of tolerating and processing the calories needed to continue to ride at race pace. To quote James when we retired at Limerick ‘I need a few days on Imodium or a very large cork!’ 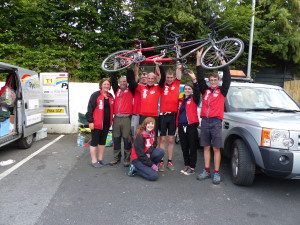 Amazingly the lady who took this photo had seen us on RTE Channel 1 and knew what we were doing.

The decision to retire from the race was particularly difficult as we had put so much into the attempt. Since we were about to enter a particularly tough part of the course, we realised that it was unlikely that we would be able to catch up on time and that we were facing more miles of the course to cover than realistically was possible in the remaining time allotted. It was against this back drop and the health issues we had to be honest and say that we couldn’t do any more. Having made that decision it still takes time to come to terms with the honest appraisal that it was the right thing to do.

Summarising the race and our involvement, it has been an incredible experience. The camaraderie within the team and with the other racers in the event has been fantastic. The roadside support from people coming out to cheer us at all hours of the day and night has also been incredible and very humbling.

Raising the profile of the work being carried out by Circles of Influence, Links International, Snowdrop Project and Tearfund and raising funds to support them has been important for us.  Our thanks to the media for running with our story and for highlighting us. The latest Radio Cumbria interview can be heard on the link below – this was recorded the morning after we retired from the race.

We also gratefully acknowledge or sponsors and everyone who has donated to these charities. Thank you.

We set out to do something no one has attempted before – to cycle a tandem around the RAI route in 132 hours. Taking on anything of this scale has many unknowns associated with it, and with fewer health issues we may have kept up the pace needed to cycle further than the half-race distance we achieved. We leave Navan tomorrow to return home with pride in our efforts and the feeling we contributed something positive to this amazing event.

-          Working so closely with a brilliant team of people with an overwhelming sense of focus and determination, with a great deal of fun thrown in for good measure

-          Cycling along to motivational music the support crew played for us eg Thunderbirds theme, Johnny be good, Starwars, etc

-          Staff at the Armada Hotel, Spanish Point, County Clare who were extremely helpful, letting us park in their carport, use the toilet facilities, refill water containers and they even provided us with coffee and pastries free of charge.

We went in to see the race organisers at their office to thank them for their hospitality and warm welcome to the event. We wish them well in future races.

Some of the RAI organisers

If we have inspired you to have a go, do get in touch with them – they will be pleased to hear from you. If you fancy entering the tandem class, we have a very reliable tandem for sale!

The next adventure ahead is for James and Laura as they expect their first child in March 2015, and for Norman and Christine as they become grandparents. Our thanks again to everyone who has taken an interest and followed Beech Boys Tandem in RAI – your support has meant a great deal to us. We hope you enjoyed the ride too. Thanks from all the team.