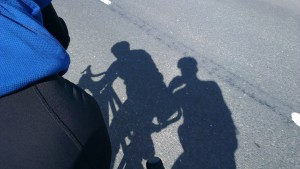 Yesterday was all about learning new tricks as Norman took on the role of pilot and James became the stoker. The reason for this change was to provide James with some respite during Race Around Ireland from having to concentrate on all the steering and gear changing, and to give Norman some mental stimulation!

James, being taller, fits the front of the bike more comfortably, however has had some discomfort in his elbows after cycling for more than 24 hours at a time. So being able to swap between positions should provide some relief for him as he sits in a slightly different position when riding as the stoker.

It was interesting to see that we were slightly wobbly as we set off as Norman got used to the balance and steering, and James realised that he didn’t have to steer while on the back of the bike! We both coached each other in the new routines and found that the other person had been doing a lot more that we had previously thought!!

Certainly during the afternoon the tandem was running smoothly and our speed had increased. We ran out of time to complete the 100 miles we had intended, however over the  6 hours we covered exactly 80 miles with an average of 15.8 mph not including the stops.

Taking what we learnt yesterday into our race plan, we are thinking of having two short spells each day when we will swap positions on the bike, however we are faster with James piloting and Norman as the stoker and that will be our preferred configuration.

Finally we are pleased to report that Pye Motors is our newest sponsor, by generously supplying us with a transit van for use during the race as the support vehicle. 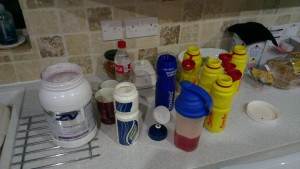 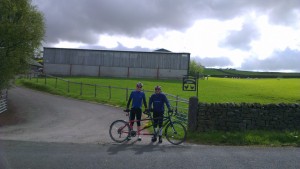 Ready for the off 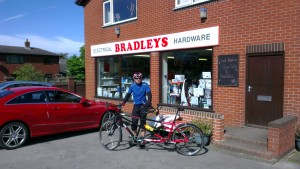