The Fellowship of the Tandem

The Fellowship of the Tandem

On Saturday 21 June Team Beech Boys Tandem met at James and Laura’s house in Sheffield for a review of our progress since completing the 24 hour ride earlier in the spring. Unfortunately at the last minute Pat was required to cover for a colleague at work and could not be with us in person, but she joined us by phone and is ready for the big time in Ireland! 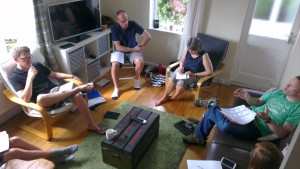 Adam, taking inspiration from Tolkein’s Lord of the Rings described the meeting as the Fellowship of the Tandem! Perhaps it was talk of the two breakfasts we were planning to eat, or was it the Mount Doom we have to cycle up?

Crew Chief Jonathan had put together an excellent Beech Boys Tandem Crew Guide and taking time to discuss our individual roles and expectations was particularly useful. Fuelled with superb coffee and cake Jonathan steered us through the agenda. It was certainly encouraging to see how much had been achieved since the beginning of April and also brought into focus the remaining tasks requiring attention such as drawing up the crew rota for driving and navigating.

Adam had worked hard with Capital Communication to sort out radios for the team to use during the race and was able to report back on this, as well as the securing of sponsorship from Twenty Twenty, a CCTV company. Great job Adam! Finally we put up a gazebo in the garden that Adam had brought along so we could see the potential of this as an extra area of shelter next to the support van. The verdict was that it would be a positive addition to the team equipment and deserved a place in the van.

Our final team working task involved moving Lydia into new accommodation. After taking boxes and cases down some very steep stairs in one house and then up some equally very steep stairs in her new house the job was finished and the Sheffield gathering of Team Beech Boys Tandem was complete.

The next time the Fellowship of the Tandem will reconvene will be in Trim, Ireland just ahead of the race start in 67 days time!